This was a full on weekend enjoying the fans and stars of Outlander in the Hilton Hotel (haven’t seen the outside world since Friday lunchtime).

There were very strict filming and photography rules in place so you won’t see as much as I COULD have taken. My words will have to do!

I am ensconced in a comfortable dble bed room in a distant wing of the hotel, which has meant my walking has increased hugely ( judging by the level of pain in lower back).

Downstairs a huge group of Outlander fans from Europe, America, Pacifica and the UK are milling around in the vestibule and bar area. Final farewells are happening and some diehards are heading towards the hall for the third night of partying.

Friday night we gathered there to welcome four of the stars of the show – Lauren Lyle, Maria Doyle Kennedy, Lotte Verbeek and Ed Speleers. 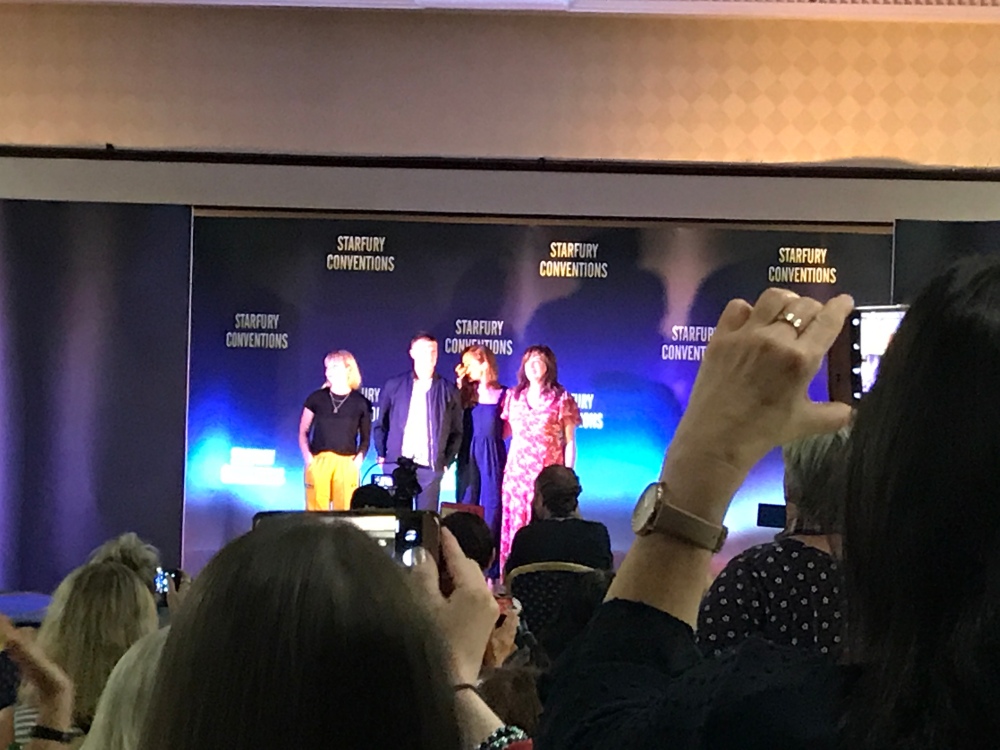 After a brief introduction they left and the party began.

Saturday was a jam-packed programme. Some earnest souls frantically bought as many of the photo sessions and autograph-signing as they could and possibly never visited the bathroom all day. I paced myself and only bought two photo sessions and one ‘meet and greet’ but still found it a task to move between the Q&A sessions and extraneous activities.

There was a LOT of queuing: 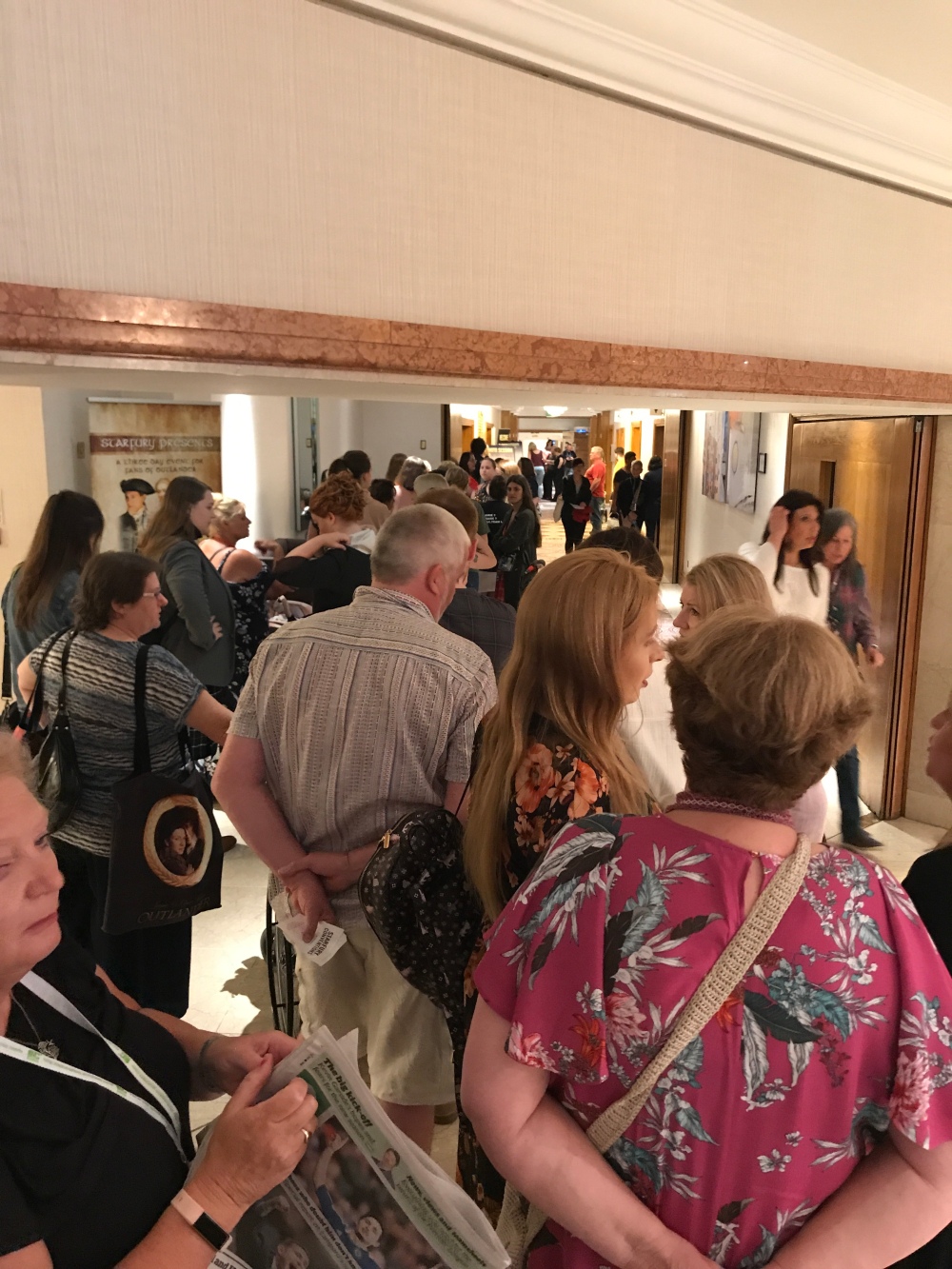 Then had to rush to sit in on Q&A session with Steven Cree and Lauren Lyle. These two are born comedians and very relaxed on stage.

There was time for a brief lunch outside before I scuttled along to sit at a table with 16 others – joined by Maria at one end and Lotte at the other. For twenty mins we chatted to both and it was my favourite part of the weekend. No photos allowed. Got to ask Lotte about the blood bath which she loved doing, and Maria about her experience acting without looking at the other actors. Both were great to talk with.

Straight after that they headed into hall for Q&A and I collapsed on my bed briefly.

At 3pm another Q&A with David Berry, Duncan Lacroix and Ed Speleers took place that was lively indeed. They all rib each other mercilessly.

Straight after that we lined up in long queues for autographs – these were free for first one so I dragged out my Gabeaux Tapestry book and prepared to use it for this purpose. The lines were SO LONG that by 6pm when I had booked a table for dinner with Glyn, I’d only managed to get Steven’s, Lotte’s and Maria’s. Ne’er mind I thought,

Enjoyed a refined pork dinner with Glyn in a fairly empty restaurant, and at 8pm headed back to hall for the costume competition. (People were still queuing for signatures).

This was the funniest part of the event. All 7 of the stars of show were judges and sat at table together heckling and commenting as each costume paraded forth. 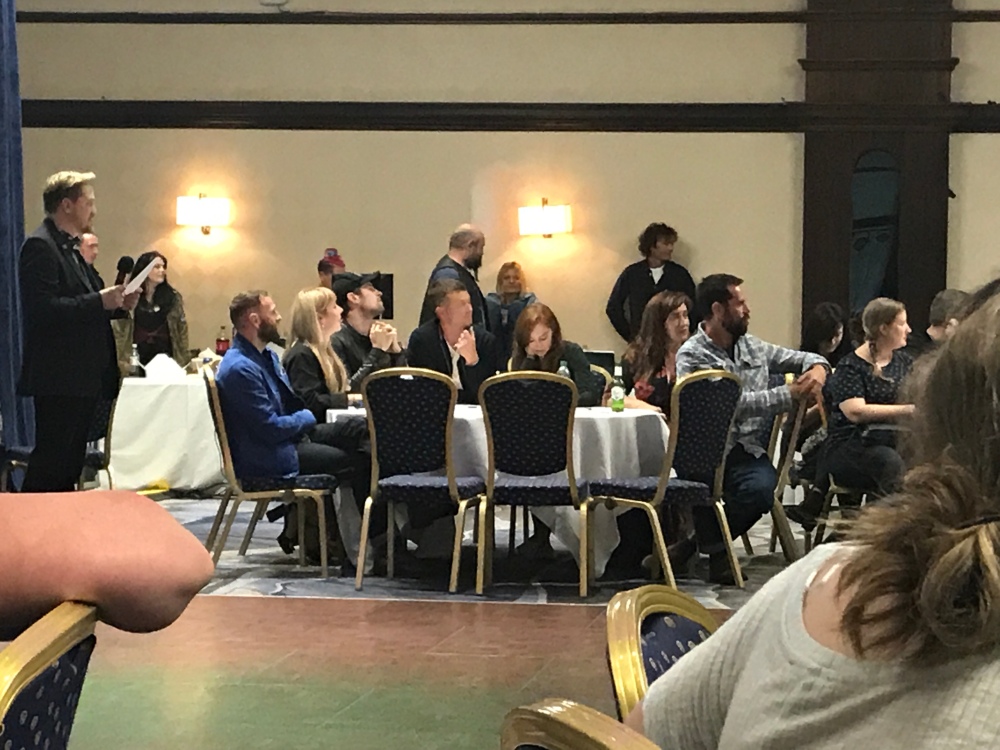 The favourites were a gigantic mis-shapen dog (Rollo) and the redcoat he attacked,

And a pair of women in skin coloured outfits with body parts on display who called themselves ‘Murtagh’s Wetdream’ to Duncan’s utter delight. I did not know where to look.

When a woman swathed in a flowing robe came out after ‘The Bacara’ was announced, knelt down and cast it off. I wasn’t sure what to expect. It certainly wasn’t the blood red body suit she wore, which got Lotte standing up to give her a standing ovation.

A refined ‘gentleman’ in wig and pastel satin 17th century pants and jacket minced out and bowed to a delighted David Berry – ‘Lord John’s friend’.

Those were all wonderful. There was a bee train which was called ‘It all started with a book’ – mobile library with the people dressed in book covers from series.

After we recovered from the costume competition we moved on to the party – a DJ playing while many got up to dance.

Sunday started – for me – with another photoshoot and one that I was front of the queue for. 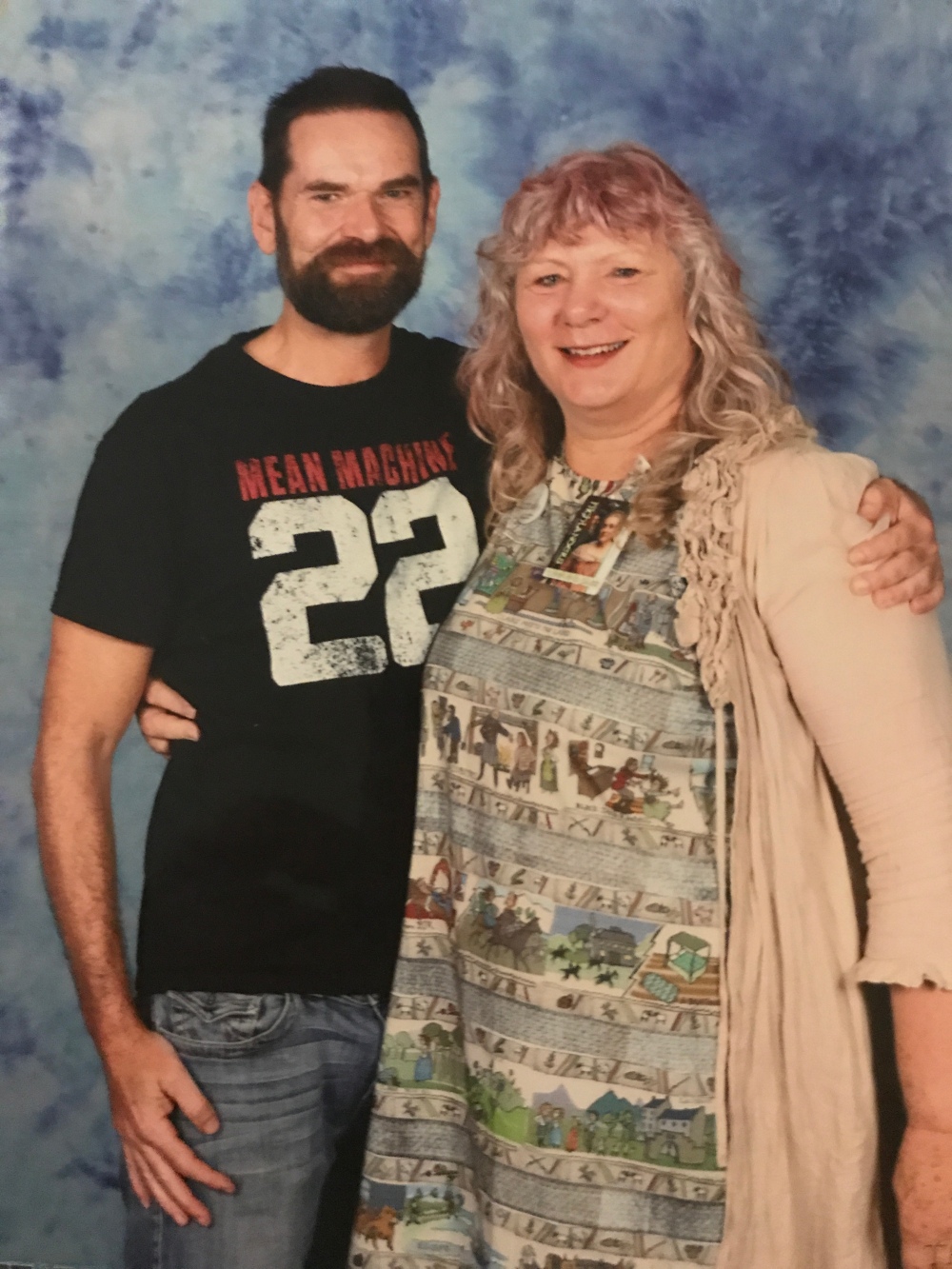 Duncan was happy to hug a kiwi – which was about all I managed to get out.

There followed Q&A from Lotte (which I missed) then from Steven Cree which I attended. This is one man who could have chatted for an hour without any questions or prompting!

I had a brief break and then went straight back in to hear David Berry and Maria Doyle Kennedy.

Both of these two were generous and gracious. Love them.

I missed the last Q&A and managed dinner before the closing ceremony. (Can’t seem to change font back sorry)

In amongst the programme there were many opportunities to meet with fans from around the world. One or two had bought my books and so I did my own mini-signing ceremony.🤣

There was a good kiwi contingent there as well.

All in all a very worthwhile trip across the world to attend.