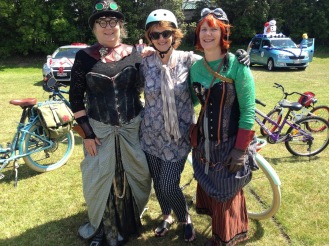 Yesterday was quite a day for cycling. It started off in the morning with a jaunt along Te Atatu Road at the back of the local annual Christmas Parade, just behind the kindergarten and before Santa Claus. Just to make it more exciting, and so we wouldn’t get mistaken for passers-by, my sis and I dressed in Steampunk. We had a ball.

Then, in the evening, we joined hundreds of Auckland cyclists who were doing the annual Bike Rave from Mission Bay to Victoria Park market. The idea is to wait until dark, synchronise music, turn on the lights and glitz, and head along this deliciously lovely ocean-side cyclepath, stopping for occasional events on the way. It was a long night but such fun.

At 11pm, we loaded our bikes up on the back of our cars, and headed home, long before the event officially finished.

I started into cycling again in 2008, and immediately wondered why I hadn’t been cycling before that. I am a definite EASY RIDER cyclist – I don’t wear lycra and I don’t go for speed. I go for the adventure. This was my first pic on the Handlebra Easy Rider club blog.

I was thrilled to be on a bike, and I have replaced that one four times. There’s something about leaving the cares of the day behind, and heading somewhere unhindered by traffic, with the wind in your hair, and sailing almost effortlessly along. We have cycled now (my sis and I) almost every weekend when the weather is good, and still not tired of it. Here we are blinged out for the Bike to Work day in Feb 2010. Helen won the prize for best dressed, which was another BIKE.